Deign, O most Holy Virgin, to take this new Con­gregation under your patronage: grant it life and growth so that it may co-operate efficaciously in the expansion of the Kingdom of God on earth and the conversion of the poor infidels.
Take us, the weak instruments of this great work, under your protection.
Be our Mother and Mistress, take care of us and consider us at your disposal according to the Divine pleasure.

Give us humble and generous hearts, ready for any sacrifice for God’s glory and for the salvation of the infidels. Grant us the spirit of recollection, prayer, union with God and conformity to His divine will.

A humble beginning: Two women, sr. Giuseppina Dones and the young Giuseppina Rodolfi with a prayer of consacration to the Immaculate Virgin Mary gave rise to a new religious Missionary family in the Church drawing from the same charismatic inspiration of the PIME.

And before that moment? Twenty years of waiting, dreams and prayers: a project that took shape slowly.

The Protagonists of the History were Sr. Giuseppina Dones, Giuseppina Rodolfi, Foundresses, Fr. Paolo Manna (beatified in 2001), Inspirer of the Charism and Bishop Lorenzo Maria Balconi, the Co-founder.

The research of sr. Giuseppina Dones

We are in 1898 and Giuseppina Dones was 18 years old. During the Popular Mission in her Parish at Baggio (Milan), she decided to consecrate herself to God through Missionary life. When her sister Ida entered the Institute of the Sisters of Reparation, Giuseppina accompanied her and she was invited to join. In 1916 the Sisters of Reparation agreed to co-operate with the PIME, the Pontifical Institute for Foreign Missions of Milan, in the dispatch of the Missionary magazines and Sr. Giuseppina Dones was assigned to this work.

The director of the office was Fr. Paolo Manna. Mother Dones met him on 9th January 1917, a date that she would never forget.

M. Dones dedicated herself to the new service with passion, convinced that it is a means to awaken the Missionary zeal in all the Christians. But the Sisters of Reparation considered it as a burdensome commitment that took their valuable time. Therefore, an idea comes to her mind: personnel, who could devote themselves to this work as a vocation, may be able to realize it better. For more than two years she kept this intuition as a secret; and in 1919, for the first time, she spoke it out to Fr. Manna.

The path of Giuseppina Rodolfi

In the same year, Giuseppina Rodolfi, a 14-year-old girl of Milan in search of her ideal of life, got an intuition of the road she was to tread. One fine day, her father brought home a missionary magazine of the PIME and, seeing it she said to herself “I have found it, I want to be a Missionary!”. There were many Missionary Institutes at the time, but she was not attracted by any one of them. By attending assiduously the activities promoted by the Institute for Foreign Missions, together with her brother Armando, she grew in her desire to be part of an organisation that had the same spirit of the PIME.

The protagonists of the History met each other

Giuseppina Rodolfi met Mother Dones during the Congress of the Friends of the PIME and Mother Dones introduced her to Fr. Manna. Giuseppina had the courage to gather around her the first group of the missionary aspirants and insisted with Fr. Manna so that he may give life to their ideal. But for a long time Fr. Manna did not decide and he put many objections to her invitation. Instead Fr. Giovanni Battista Tragella, supported and encouraged Giuseppina in her difficulties.

In 1934 the PIME Fathers, during their General Chapter held in Hong Kong, accepted the proposal to establish a female Institute parallel to the PIME and the project was entrusted to Msgr. Lorenzo M. Balconi, the new Superior General of the Institute. But again they had to wait for two more years. Finally, on 8th December 1936, Mother Dones and Giuseppina Rodolfi in front of a small altar with the picture of the Immaculate Virgin Mary, in a rented house in Milan, consecrated themselves to God for the Mission.

Inspirer of the charism 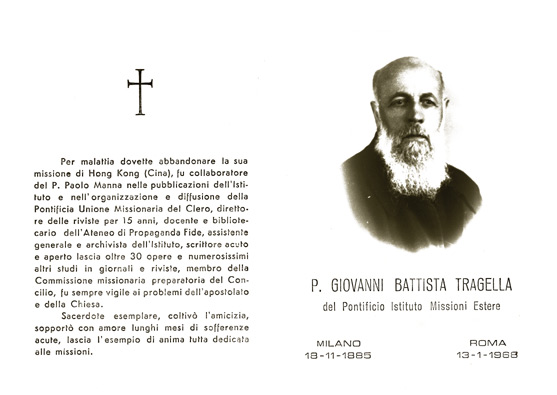 Poor missionary-priest… of paper! The Lord has mercy on us and if He wants to use our poor being, our little flame to illuminate the “world” a little 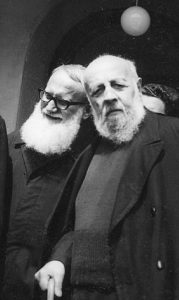 Fr. Giovanni Battista Tragella was born in Milan in 1885 and entered PIME in 1911 when he was already a diocesan priest in Genoa. After two brief periods as a missionary in Hong Kong (China), in 1912 he was forced to remain definitively in Italy for health reasons.

He was a man of intelligence and he is considered as the founder of the missiological studies in Italy. He was the first professor of Missiology of the Urbanian University in Rome and a member of the preparatory missionary Commission of the Second Vatican Council.

From 1916 he substituted Fr. Manna in charge of the missionary press and of the “Missionary Propaganda” in Milan and collaborated with him in the spreading of the missionary ideal in Italy, not to search for the economic assistance and vocations for his own Institute, but to make known and to love the mission at the service of the whole Church.

He was a historian, journalist and writer and in 1922 he began the “Missionary Library” by publishing ten volumes in a year for subscription. The “Library” of Tragella with 170 volumes in 24 years represented the most promoted series of missionary books in the history of the Italian missionary publications.

To spread “Italia Missionaria”, a missionary magazine of PIME for children, Tragella founded the “Little Friends of PIME ” whose first conference was held on 18thJuly 1926. In 1928, the initiative expanded and became the PIME Friends Association which is continued today as “Missionary Congress” each year.

“God, who was inspired you with this plan will also give you the courage and the ability to bring it to completion. You know better than I do, that when we are dealing with works of God it’s He who acts. We can only contribute and even for this we need His infinite kindness and almighty grace”.

It is he who inspired and accompanied the young Giuseppina Rodolfi in progressing in her missionary dream; It is he who was interested in the project of the foundation of the Missionary Sisters of the Immaculate with Fr. Manna. It is he who constantly encouraged the young aspirants to persevere and proposed the prayer of initiative for the “Missionary Week”.
He died in Rome in 1968.

“How we feel that the missionary vocation is truly the most beautiful, the most desirable, the most enviable, the most enrapturing among the things of this world!”, “My dear friend, you too possess this beautiful thing: take heart!”. Do not let it enclose you but bring it to maturity and to blossom, say to the Lord with insistence, with holy importunity, and try to deserve it more and more by letting the love to grow for the Lord of the harvest, the inspirer of all the apostolic initiatives, the first Person concerned in this great cause”.