“The Mission in the Parish… Firm resolution to become a Religious, a Missionary religious” 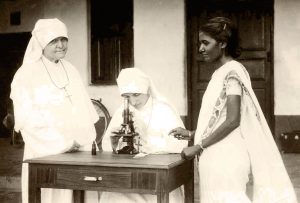 Giuseppina Dones was born in Seguro at Settimo in Milan on 8thJanuary 1880. She was the seventh of the ten Children of Dionigi and Gerolama Vallè. At the age of 18, she decided to become a missionary sister and entered the Institute of the Sisters of Reparation (founded by Father Salerio, PIME) on 16thJuly 1899, in which she made her religious profession on 28thOctober 1902. Until 1916 she worked in the different communities of the Institute for the children and girls who were in difficulties. In 1917 she went to the Expedition Office of the Missionary Press of the Pontifical Institute for foreign Missions in Milan. It is there that, she had the first intuition about the necessity for the missionary animation. She cherished for two years in her heart the dream of a new religious Institute for women animated by the same missionary passion of PIME. She shared her desire first with Fr. Paolo Manna, PIME, in 1919, and then with a young girl Giuseppina Rodolfi, in 1927. She waited for years for the realization of the project with intelligence and discretion seeking that only the Will of God is accomplished in everything.

“Lord whatever You want, I too want. Give me only the grace to love you and deny you nothing, but to give you generously and lovingly whatever you ask me” 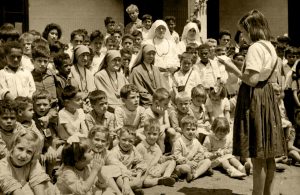 When, in 1934, the General Chapter of PIME approved the foundation, Msgr. Lorenzo Maria Balconi, the new Superior General, officially requested for Mother Dones to the Sisters of the Reparation to help in the first steps of the new missionary Congregation. On 8thDecember 1936, Mother Dones officially started the congregation of the Missionary Sisters of the Immaculate with Giuseppina Rodolfi, and quickly welcomed and dedicated herself in the formation of other young girls who shared the same missionary passion and prepared themselves to go for the missions.

On 10thJanuary 1948, Mother Dones definitively left the Institute of the Sisters of Reparation and became a part of the new missionary Congregation. She became the Superior General, from 1948 to 1963. In 1951 she visited the first mission opened in India and in 1958 that of Brazil.
She died in Milan on 8thMay, 1967.
On 14/10/2006, the IX general chapter proclaimed her along with Giuseppina Rodolfi the foundresses of the Congregation of the Missionary Sisters of the Immaculate.

“Let us become holy dear Sisters. Let there be nothing on earth that can be compared with the joy felt by a soul totally offered to the Lord, the one who prays, works and sacrifices herself for the coming of God’s Kingdom”