Together we made it 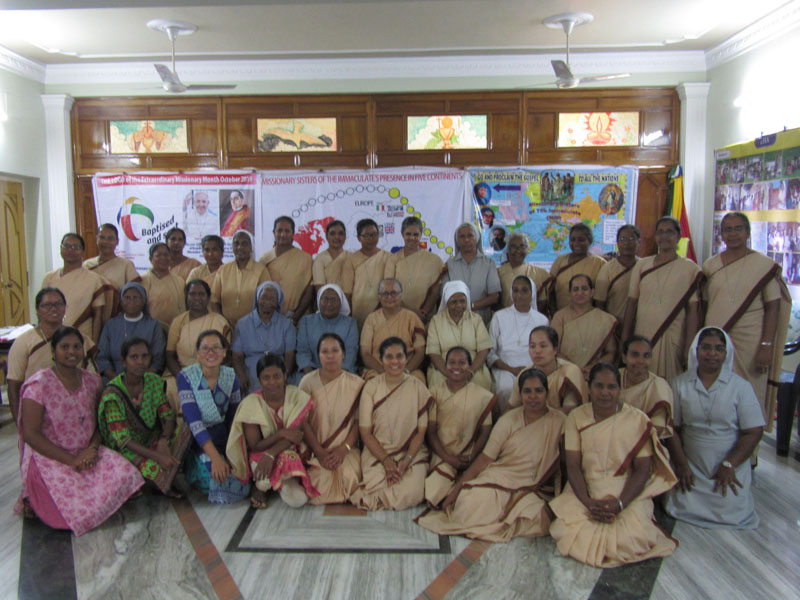 The Extraordinary Missionary Month October 2019 truly gives to every baptized person a unique opportunity to breathe new life into the missions.  Much more to us the missionaries for it stimulates our missionary call. During the Inter Provincials meeting at Nellayi in Kerala, with a singular objective to revive our missionary spirit, to plan adequately the Extraordinary Missionary Month in our communities/parishes/dioceses and to expand our Biblical, spiritual, constitutional and pastoral horizons, Sr. Anita Alva, the Provincial Superior of Siliguri had proposed to have a combined seminar on Missionary Animation. She wanted not just few sisters to attend it, but everyone to whom it would be possible. Finally, on 23 and 24 August in collaboration with the sisters from Vijayawada and Hyderabad provinces the seminar was organized. All together there were 44 participants with one PIME father, which was a big gathering for this small province.

On 23 morning resource persons: Sr. Gnana Sundari Nagothu, Sr. Namitha Louis and Sr. Shanti Chinta explained with clarity the various dimensions of Missionary animation. In the afternoon, the Holy Mass in a Missionary spirit was animated, which was celebrated, by His Grace, Most Rev. Vincent Aind, the Bishop of Bagdogra. A Missionary band was tied to all the participants with a short explanation. After which the Congregation was led to the Chapel in procession. At the very outset a brief introduction was given explaining the significance of the day. During the enthronement of the Bible five sisters cladding themselves in five colors of the five continents spoke about the significance of each color and the dire necessity of spreading the Good news to the peoples. After the Gospel reading the postulants enacted the Martyrdom of Blessed John Mazucconi in Papua New Guinea. In his homily the Bishop besides highlighting the Extraordinary Missionary Month October also spoke about the heroic deeds of different missionaries. 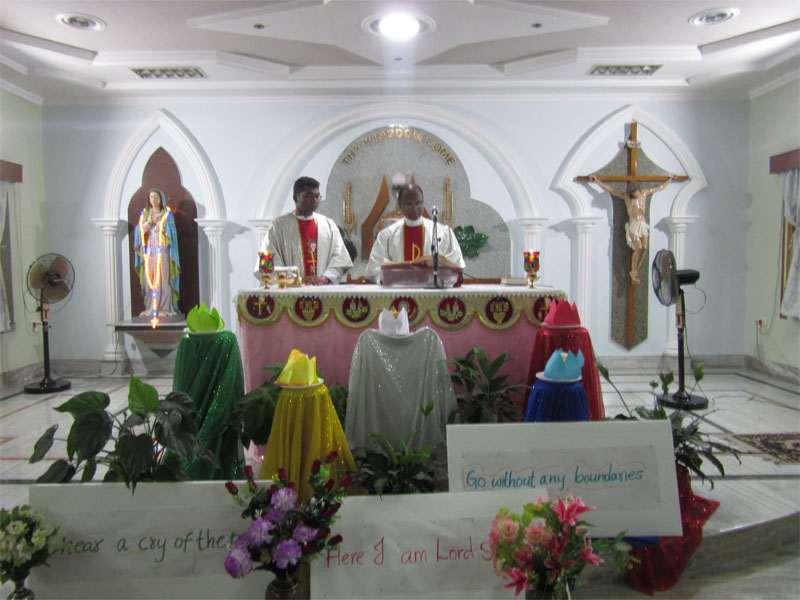 The offering procession was very symbolic. Sisters went in procession carrying the diverse things that a missionary takes along with her on her journey, such as the Bible, the cross, a missionary bag, a diary, etc, a short prayer was made on each symbol and they were handed over to another sister. The Bishop in turn blessed the sister who received these missionary symbols and sent her on a mission. The Holy Mass not only renewed the missionary passion but also created deep love for the missions.

On one hand the seminar was very enriching and on the other it was informative. Lot of dynamic inputs that were emphasizing the missionary dimension kept the participants vigorous. So much so it was expressed by many that two days were not sufficient as the resource persons had plenty of things to share with the participants.

First of its kind in the history of the Indian Organisms a combined missionary animation seminar was held. The outcome was splendid, enriching, and elevating. Through out the seminar the feeling of ONE APOSTOLIC BODY was lived and shared.  All the participants returned to their communities with renewed enthusiasm to make a difference in celebrating the Extraordinary Missionary Month October 2019. Thanks to the intuitions of Sr. Anita Alva that facilitated the organization of the seminar in Siliguri. An apt response from the provincials with their councils had made the whole journey of the seminar a thought provoking. THANKS to GOD, for our missionary vocation and the grace to respond to it faithfully.