My new mission, a journey into the unknown

It was exactly 52 years ago, like Abraham, I was asked to leave my country, my family for a second time and go to a Place that God will show me: Hong Kong.

Before joining our missionary family, I used to say that I want to go to a faraway mission, I meant not to enter a local congregation. I never dreamt of going to a foreign mission like Hong Kong.

I joined the MSI Family in 1962 and at that time there were no Indian sisters being assigned to foreign mission, although few sisters went abroad to study. Mother Clara, during the spiritual reading time used to tell us that we are exclusively missionaries and we must be ready to go to any mission to share the Good News of Jesus. This really impressed me. In 1965 I made my first profession and then completed my studies as a teacher. I was expecting that I will be posted in some schools. But God had other plans for me to be elsewhere.

During the summer holidays of 1968, I was asked to help in the vocation promotion in my Diocese, where sr. Rita Maggioni, Sr. James and the newly arrived missionary Sr. Marcella Giacomello were interviewing the candidates. Before I left for Kerala, I was given some letters to be given to Sr. Rita. Little did I know that I was carrying my future assignment in my hands. The next day Sr. Rita called me to her office, on her table there was a letter and pointing it out she said, Mother Clara wants to send you to Hong Kong as a Missionary to start a school, are you ready to go? Yes, sure, I said without any hesitation. After some exchanges, I left the room and doubts and fear began to well up in my heart. Why did I say, yes, I do not know the place, I am inexperienced in everything, will I be able to face the challenges of the new place and the activities? I felt terribly scared. At the same time within my heart I felt that since God has chosen me and I have not asked for it, He will take care of everything and I surrendered myself to Him. I cannot remember any circular being read in the community about my assignment to a new mission. I had scarcely three months before my departure. There was no preparation, nor animation except the simple ceremony of missionary mandate. 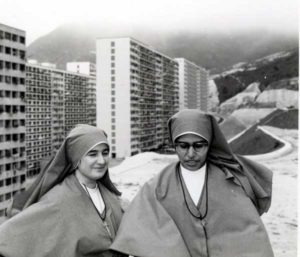 Thus on 11/9/1968, comes true my dream of going to a far off mission. Arriving here, everything is new, different, strange, no place to call our home…We were guest of Canossian sisters. There was here not a single soul that I had known or met. The first year was really very tough for insertion into the Chinese society: learn the most difficult language, adapt to Chinese food, learn about Hong Kong and how to start the school, of which nothing is said. There were moments of loneliness, anger and the temptation to run away from here. There was no one to whom I could share what was going on in my heart, my life. The only consolation and strength was the Word of God and the Eucharist. I used to spend long hours in prayer.

What about insertion and inculturation into the Chinese society? Living with the Canossian sisters in the beginning was an introduction, as they were of different nationalities and cultures, learned the customs and traditions, about festivals, learned to appreciate Chinese food, and learned Chinese language as much as we could at that time. We lived and practiced it in our daily life without much discussions. We received support and encouragement from different people as we started our apostolate.

Now after five decades, looking at the initial days, I wonder how I survived the beginning of our presence here. One thing is very evident: God, who called me and brought this inexperienced person, was always with me guiding me step by step so that I can carry on the mission to which He has brought me here.