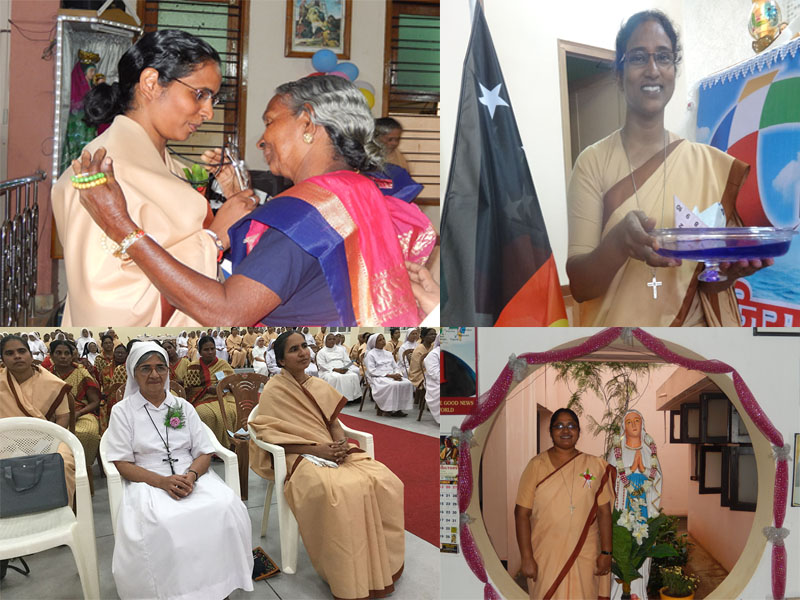 “Baptised and sent: The Church of Christ on Mission in the world,” is the theme chosen for this special year 2019. It accentuates that being sent on a mission is a call that comes with baptism. This mission of being sent for salvation brings about the conversion of both the one who is sent and the one who receives the message. Pope Francis puts it beautifully, “Mission is not a product we have been given to sell, but a life to be communicated.” He continues, “Our life is a mission, we ourselves are mission.”

To receive the Missionary Mandate during this special year of the Extraordinary Missionary Month October 2019 is in itself a moment of great joy and happiness. Pope Francis continues to reinstate in every baptized the Missionary nature of the church. The logo itself indicates the two characteristics and inalienable elements of every Christian: Baptism and Proclamation. Geared up by all these inspirations four of our sisters belonging to the three different organisms of India lived concretely this gesture as they received the missionary mandate to go to the furthest end of the world.

Sr. Jessy Rymond, a missionary destined for Tunisia received the missionary mandate on 1 September 2019, at the Church of Our Lady of Perpetual help, Seethaphalmandi in Secunderabad. Rev. Fr. Thathireddy Vijaya Bhaskar, SDB, in his homily presented the four stages of a missionary through which an open invitation was given to Sr. Jessy to ENCOUNTER (through prayer), to WITNESS (through life), to PROCLAIM (through apostolate) and to SERVE (through love) Gods message of Salvation to the people she is sent. The presence of Sr. Rekha Garwal, the pioneer of our mission in Tunisia, added much meaning to the celebration. She presented her missionary journeys from India to Italy to France to Tunisia. The parish community gave an immense response by actively participating in it. After the Mass, there was colourful missionary exhibition, wherein both young and old who were present were interested to know the missions in different continents of the world.

Sr. Rosilla Velamparambil, who served the institute for two consecutive terms as its Superior General, after the completion of her service, received the missionary Mandate to serve the people of Papua New Guinea on 6 September 2019, at Nirmala Convent, Vijayawada. Most Rev. Vijayakumar Rayarala, PIME, the newly consecrated Bishop of Srikakulam in his homily gave stress on the Biblical Quote, “I have to go to other towns also, for this I came (Lk 4:43). He said, “Mission is dynamic, it’s a journey, it’s a movement and it’s an adventure.” He emphasized on Jesus who was sent on a mission given by the FATHER. Jesus went about preaching, healing, blessing and this was the invitation given to Sr. Rosilla to go about doing good like Jesus. After the Holy Mass both the Bishop and Sr. Rosilla were felicitated and blessed to be the missionaries to the ends of the world.

Sr. Anju Joseph, the first missionary from the tiny Delegation of Delhi, destined to the Church of Papua New Guinea, received her missionary mandate on 2 October 2019, at Nirmala Bhawan, Duhai. It is praiseworthy to note that the local Church of Meerut is sending out its missionaries to different parts of the world. Many of the sisters of the delegation and the parishioners were witnessing this modest and yet heart rendering blessed rite. The Eucharistic moment became much more alive to the church of PNG, because the main Celebrant Rev. Fr. John Bhaskar Berkman, PIME, a missionary from PNG touched the hearts of the faithful with his personal experiences lived in PNG. He invited Sr. Anju to become a cheerful giver, in Gods Kingdom. He further highlighted that the total self-giving, life of hard ships and challenges in the mission becomes the stepping-stones to escalate TRUST in God and to intensify FAITH in Him.  It was also a God given moment to enlighten the participants towards the responsibility of mission of Jesus. First of its kind, in the delegation of Delhi, brought awareness amongst the faithful and made them to thank God for having been baptized and to appreciate their call to be sent out.

Sr. Padmalatha Vemagiri, received her missionary mandate for Italy on 23 October 2019, at Holy Cross Church, Gajuwaka, Vishakapatnam, her home town. The parish was delighted to celebrate this special event during this Extraordinary Missionary Month October. Most Rev. Prakash Mallavarapu, Archbishop of Vishakapatnam along with a good number of priests con-celebrated the Holy Eucharistic Mass at 18.00 hrs. In his homily, he invited everyone, to understand the dire need of the Church and to go about preaching Gods Kingdom. While appreciating the courage and the missionary Spirit of Sr. Pushpalatha, he invited her to work like Prophet Isaiah amongst the people of Italy and to do miracles in Gods name. The whole liturgy was animated in Telugu (local language) giving importance to mission ad gentes. Before the mass, the missionary rosary was conducted which helped the faithful to pray for the five continents and to understand better our missionary vocation as Baptised. At the conlusion of the Rosary, a 30 minutes video was played in telugu explaining the origin and the growth of MSI family. The church was packed to the gills to attend this special event. The celebration concluded with a liturgical dance inviting everyone to go to the ends of the earth with Good news of the Kingdom of God.