Members of the General Direction 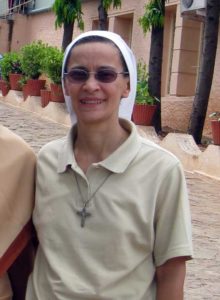 Sr. Antonella Tovaglieri, Superior General – was born at Busto Arsizio in the province of Varese, Italy. She made her religious profession in 1992. She was already a nursery teacher but she obtained a diploma in Religious Sciences from the Institute of Paul VI in Milan and a diploma in the Formation from the Higher Institute for formators. She taught in the nursery school at Monza. From 1998 to 2005, she was the formator for the postulants. From 1999 to 2005, she was the Provincial counsellor for the Province of Italy. In 2007, she left for the mission of Papua New Guinea. From 2011 to 2012, she was the counsellor of the Delegation of Papua New Guinea. In 2012, she was elected as vicar general and presently she is the general coordinator for Initial formation. In 2018 is elected as Superior General. 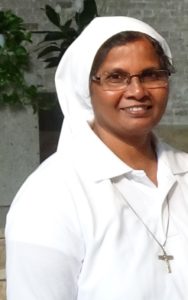 Sr. Mary Bridgit Suvakeen, Vicar General – was born in Nagercoil, Tamil Nadu, India. She made her religious profession in 1989. From 1995 to 1997 she worked as a teacher in Holy Angels School run by Capuchin fathers, in Sahibabad. She made her theological studies at Mater Dei, Goa. In 1998 she left for Papua New Guinea. From 1999 to 2014 she was working as a teacher and principal of the Santa Maria Secondary School at Watuluma.

From 2014 to 2018 had been counselor and secretary in the delegation of PNG and from 2015 was appointed the superior of the delegation house at Port Moresby. In 2018 has been elected General Counselor 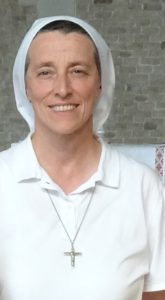 Sr. Maria Elena Boracchi, General Councilor – was born in Monza, Italy. She made her religious profession in 1991. She was already a teacher in literature and completed her Theological studies in the Gregorian Pontifical University, Rome and also completed her formators diploma course. In the year 1997 she left for Guinea Bissau. Returned to Italy in 2005 to take up the responsibility as mistress for postulants and novices. From 2006 to 2017 she had been the provincial counselor and the coordinator of  formation. in 2018 she has been elected General Counselor. 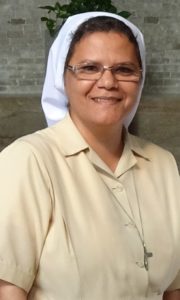 Sr. Marisa Pereira, General Councilor – Born in Antonio Gonsalves, Bahia, Brazil, she made her religious profession in 2001. She completed her study in Social Sciences in the University of FMU San Paolo. From 2001 to 2009 worked as teacher at Vila Missionaria, San Paolo and in 2010 left for Bangladesh. From 2014 was involved in the pastoral work in the community of Zirani till 2016 and became superior of the community. From 2017 to 2018 was elected provincial counselor and was in charge of missionary animation. In 2018 has been elected General Counselor. 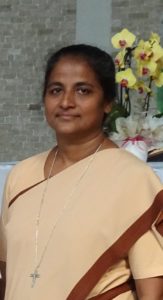 Sr. Biji P. Koonamparayil, General Councilor – was born in Maramkode, in Kerala, India. She had been teaching in Nirmala High School, Vijayawada, and has completed a diploma course in Spiritual Theology at Jyothir Bhavan at Kalamassery, Kerala. From 2007 to 2014 she worked as  the principal of Nirmala High School, Vijayawada. After that she did her Masters in Spirituality of Formation and counselling at Dharmaram Vidya Kshetram, Christ University, Bangalore. From 2016 to 2017 was in charge of aspirants and young perpetually professed sisters at Nirmala Bhavan Vegavaram. From 2017 had been the counselor and secretary to the provincial and in 2018 has been elected General Counselor.