That’s how I want to be! 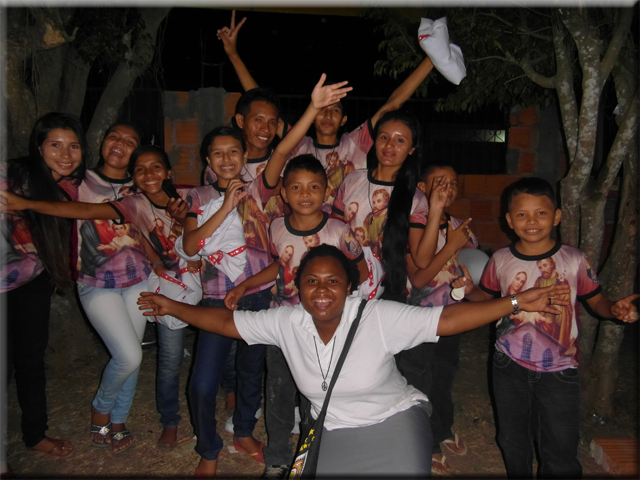 The mission is born in the heart of God the Father, moved by the groans of his people. God feels compassion for his sheep and chooses, from his flock, messengers of the Good News of salvation.

The kingdom grows in the heart of the missionaries, who wrapped by the consolation and the mercy of God, earnestly feel the desire to proclaim the Father’s love in the whole world. It develops in humanity, as a grain of mustard seed, just in those situations where life is threatened and its action is marvelous.

God never fails to succor his people! The mission is the letter of Father’s love for every human creature. Written with the yes, the sweat, the blood and the lives of those who have been chosen and called to proclaim the Good News of the Kingdom to all people.

Infected by the missionary ardor, I said a feeble yes to the Father. I was born in the town of Feira de Santana, better known as Princess of the Country, in the State of Bahia (Northeast of Brazil). In this city, the Missionary Sisters of the Immaculate of the province of South Brazil have their community.

I asked myself questions about what I was looking for: “What am I missing? I am a catechist; I coordinate the youth group and animate the community, in addition to working in a multinational company and attending a course to be a Fashion Designer”.

One fine day I was participating in a theology course for lay people, where I heard Sr. Regina da Costa Pedro (MSI), teacher of the Social Doctrine of the Church, sharing her missionary experience in Cameroon.

At that moment, my heart began to beat faster. Words are not enough to describe what I felt at that moment! The only thing I could say to my friend sitting next to me: “That’s how I want to be!” In the words of Mother Igilda: “I have found it, I want to be a missionary!”

The passion for the mission, a burning desire to be an apostle, was born when I least expected it. Since that moment, however, I had had no peace until I offered myself to the Mission.

It has been almost seven years, but the joy of knowing that I can be missionary ad gentes, ad extra and ad vitam grows more and more. Presently I am a second year novice, finishing the apostolic experience in the community of Parintins (Amazonia) that belongs to the Province of North Brazil. Parintins is an ad gentes reality within my own country.

Every day I feel more attracted and passionate to continue the mission that Christ gave to his disciples: “Go into all the world and proclaim the Good News …”. To continue the mission of Jesus is a great challenge: is the option for the poor, for justice, for the life in abundance for all. It is to announce, but also to denounce the capitalist systems and anti-Kingdom of today’s society.

Jesus himself, however, goes on to say: “… I will be with you until the end of time.” Those who adhere to the project of the Kingdom of God do not walk alone, besides the presence of Emmanuel, God-with-us, lives in the community.

To live together as brothers and sisters: is the first proclamation of the Kingdom of God in our midst. I want to be missionary: I desire to announce your Kingdom of love in the world, to be a sower. As Jesus has done, the Apostle of the Father who was never tired of sowing the seed! As Jesus has done, a tireless missionary who gave his life in an act so noble.