Areca nut, commonly known as betel nut and in Papua New Guinea (PNG) pidgin language known as buai is a popular nut chewed in many communities of PNG. 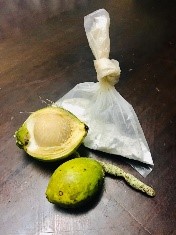 The nut is chewed with mustard (seed and or leaves) mixed with lime which gives the chewer an elated or ecstatic social emotion. Commonly used at social gatherings, when feeling bored, and or to keep one occupied or just for pass time.

Buai, once a cultural and social crop has turned into a major economic and commercial commodity. Its social popularity keeps its economic viability. Government authorities of cities and towns try regulating the sale and purchase of the commodity without much success. Some places especially in the highlands of the country not known for growing buai now able to, or, the nuts are transported from the coastal provinces and sold in the highland provinces.

Medical science has shown that buai chewing could lead to cancer of the mouth, throat and internal organs of the body. It is a health hazard. There is extensive awareness of risks associated with buai chewing. But people continue to chew. It is a social nut. It builds friendship. It gets people talk as they would over drinks.

Buai is also a huge environmental menace. When people chew, they spit. Where they spit and how they spit is night mare for regulating authorities and eyesore to the

public. Buai spittle in the streets of Port Moresby and many other towns of PNG is big social and environmental nuisance. There is no responsible disposal of the litter by the people in the buai business. Buai spittle invites flies, mosquitos, rats, and other unwelcome creatures coupled with polluted air.

Littering and loitering are summary offences punishable under law with penalties of fines and or imprisonment. The social and commercial interests of the nut exceed the deterrence effect of the law. Law enforcement agencies are giving up when continued disobedience and defiant resolve of the buai sellers and buyers remain unrepentant and unabated.

Care for our common home being a central message of Laudato Si is an issue with the popular buai in PNG. A concerted and coordinated approach to education and awareness on the responsible use of the popular nut could go a long way to help keep the people and communities clean and healthy. “Cleanliness is godliness” could be an evangelizing theme for Christians and people of goodwill to join in solidarity for the common good of all especially when the people’s favourite nut will be around for a long while yet.