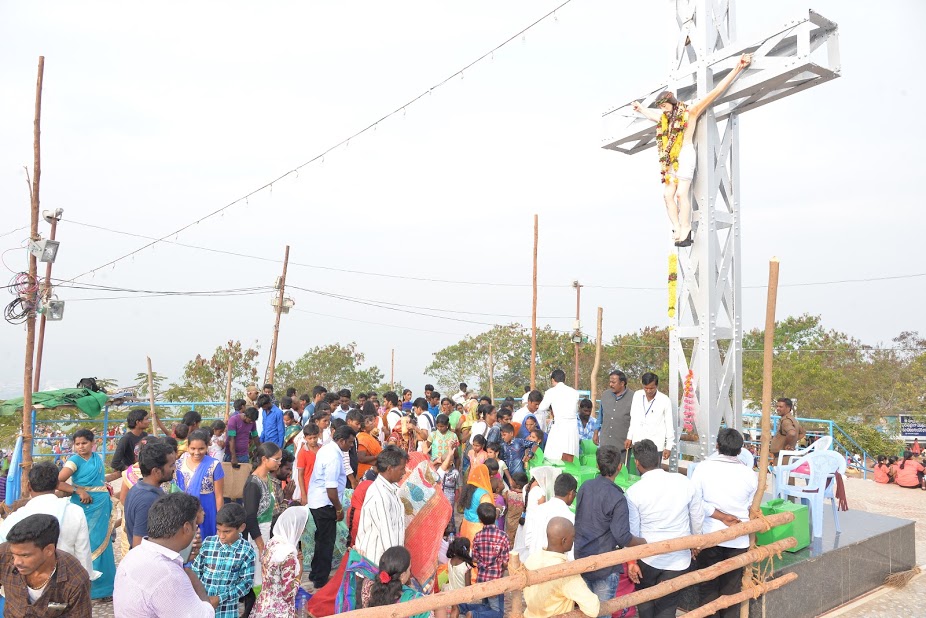 In 1923, Msgr. Pezzoni PIME, obtained 25 acres of barren land from the government of Andhra Pradesh. At the foot of the hill at Gunadala, he opened an orphanage and school for boys. From here, on June 15, 1923, along with 30 orphans, he was shifted to the mission school at Bezwada. It was Fr. Arlati, the first manager of the institution, who cleared the jungle and in 1925, made his way with a handful of people and consecrated the statue of Our Lady in a niche on the hillside. It was followed by the Feast of Our Lady of Lourdes which became an annual event for the people living nearby and for the local Catholics. The shrine of Gunadala Mary Matha became a Diocesan Shrine by 1937 and Fr. Arlati placed a new statue on the hill and shifted the date of the feast to September 8. A beautiful altar was fashioned in front of the grotto, where Mass could be held on different occasions. In 1947, the then Vicar General Msgr. A. Bianchi left for Italy and the work of the church was handed over to Rev. Br. Crippa. Incessant rains led to a shift in the feast date to February 11. Bishop Marampudi Joji initiated a study for the process of raising the shrine to the status of a Basilica. He enhanced the status of the shrine by transferring the mortal remains of the first Bishop of Vijayawada from Italy to Gunadala and renovating the cemetery. 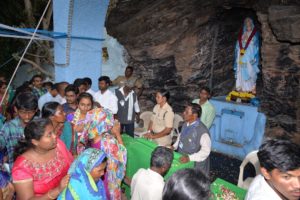 At the Gunadala Mary Matha Shrine, the presence of Our Lady of Lourdes is believed to have miraculous healing powers for the sick and suffering. The strong belief and faith of the people bring them here in large numbers. The shrine today is synonymous with the healing grace of the Mother. Irrespective of class, creed and religion, people come here in reverence, offering their prayers to Mother Mary and asking her to bless and cure them. 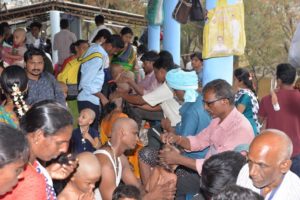 ritualistic performances. The most common amongst them is the tonsuring of the heads in reverence and as an offering to Mother Mary. During these three days of feasting and celebration, the winding path fills up with people slowly proceeding towards the grotto of Mother Mary on the Gunadala Hill. Many come with their newborn babies to be blessed, while the other come in gratitude and to renew their vows and seek the blessings of the church. Lakhs of pilgrims come during the celebrations, offering small replicas in silver of the ailing body parts. Coconuts, flowers, incense stick and fruits are presented to the statue of Mary Matha.

The Mary Matha Feast sees people from various faiths coming to the shrine with great devotion. Pilgrims and visitors arrive in thousands each day during the three-day celebrations. The festival as usual had slowly gathered momentum with the novena prayers and Masses which commenced from 31 January. Priests from different dioceses and religious congregations celebrated the novena masses. The priests, religious and the faithful from city parishes participated in huge numbers in the Eucharistic celebration. 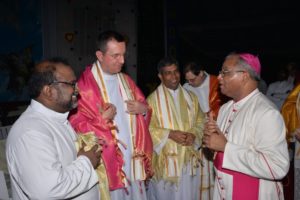 On 11 February, 2018, the feast day Eucharistic was celebrated by Bishop Joseph Raja Rao of Vijayawada in the morning. Many priests of the diocese concelebrated in the Mass. The religious and the faithful came in good number and participated in the Mass with great devotion. It was really a meaningful celebration on that day praising God for his wonderful blessings with the magnificent soul of Mother Mary. In the evening, the Eucharistic adoration was conducted for the sick.

Apart from the major Eucharistic celebrations, Masses were celebrated in the Parish church and perpetual Eucharistic adoration was organized 24 hours by the diocesan charismatic team. Cultural programmes were staged on the newly built stage all through the festival days day and night. Public service people and the volunteers rendered their service for the success of the festival.

Our sisters were very much part of this celebration. Sisters from Nirmala Niketan and Nirmala Convent were involved in decoration. Our sisters who are doing Catechetical Camps in the Dioceses of Vijayawada were rendering their service to pray over the pilgrims.