Honoured for being missionaries 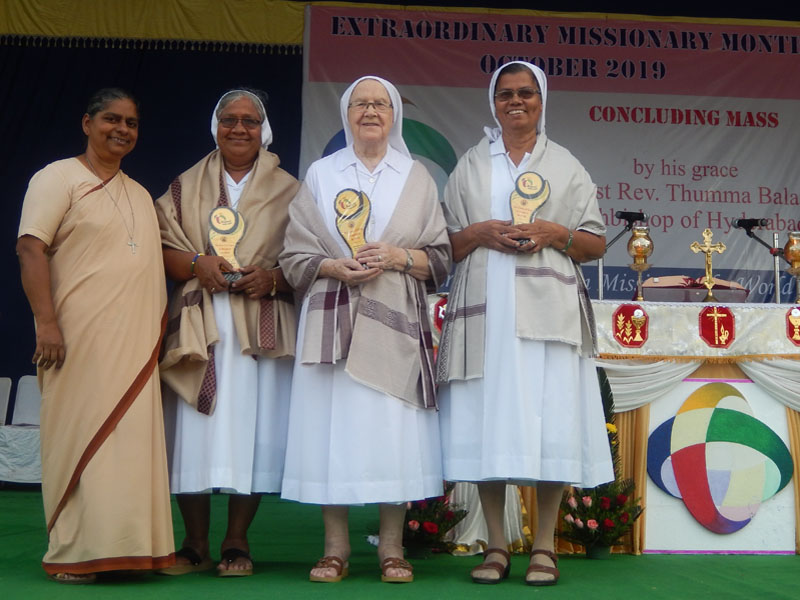 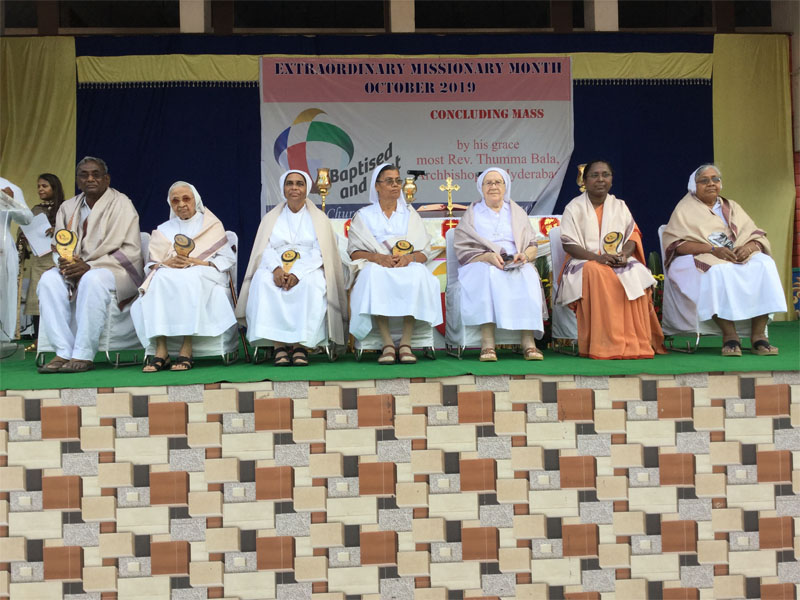 “Missionary awakening must not be limited just to the month of October of this year, decreed by Pope Francis, but must become the part and parcel of our each days living despite our busy schedules and activities amidst which we live and move,” said Most Rev. Thumma Bala, D.D., the Arch Bishop of Hyderabad in his concluding ceremony of the Extraordinary Missionary Month October 2019, on Thursday 31 October at St. Mary’s ground, Secunderabad.  The day was marked by honouring the missionaries both religious and laypersons from different congregations who had been in various parts of the world, as preachers of God’s Word and His Kingdom. At this juncture, its praise worthy to mention that three of our sisters were honoured for their selfless service as apostles of Jesus who carried His message to the people who are far off. Down below we introduce the honoured missionaries of our MSI family:

Sr. Angelica Besana: Sr. Angelica Besana was born on 12 May 1936 in diocese of Milan (Italy). She entered our congregation 1960 and made her first profession in 1963. Sr. Angelica after completing her nursing, as a junior sister came to India in 1966. On 18th March arrived Mumbai and from there proceeded to Vijayawada. She rendered her services in different hospitals like Gudivada, Amalapuram and Vinukonda. She continued her service as regional superior, vice provincial, councilor and superior in Hyderabad Province. She is a zealous missionary who works tirelessly in Andhra Pradesh and Telangana for last 53 years. In spite of her ill health, her missionary passion radiates joy to all.

Sr. Silvana Lobo: Sr. Silvana Lobo was born on 22 April 1945 in the diocese of Mangalore, Karnataka. She entered our religious family in 1962 and made her profession in 1965 in Bhimavaram. Sr. Silvana was sent to Mumbai to care for the hansenian and later completing her B.Sc Nursing, rendered her service in our hospital at Amalapuram and Gudivada. In 1988, she left for the mission in Papua New Guinea as Pioneer Missionary, to a totally unfamiliar shore. She rendered her missionary service for 27 years in PNG, starting from scratch and raising it to a Delegation and presently is back to the Province. She worked courageously and enthusiastically climbing the hills and mountains, crossing the rivers and seas to make known Christ to the people of this Island.

Sr. Rajamma Pudota: Sr. Rajamma Pudota was born on 8 January 1956 at Thimaraopet in Warangal Diocese. She joined our Institute in 1973 and made her first profession in 1977. Sr. Rajamma after completing the Teachers training taught in Gudivada, Halia and Shantinagar schools. In spite of being a teacher her passion to make known Christ did not spare her in walls of the school but went to the villages preaching the Good News of Christ to the people. In 1992, she was destined for the Church of Cameroun. She inserted herself to totally unknown culture and life style. She rendered her missionary service for 22 years, with much love and compassion for the people in the remote areas of Cameroun. She continues passionately the Catechetical and pastoral work.

“Our joy is doubled and we have no other word on our lips than to say THANK YOU GOD for calling us into this specific missionary Institute,” said all the three honoured missionaries as we asked them to share their sentiments of the day.   Being an Exclusively Missionary Congregation this month gave us plentiful opportunities and bounteous occasions in the Archdioceses of Hyderabad to make known our Charism and to stir people of God with missionary passion. During the Solemn Eucharistic banquet the enthronement of the Bible was animated by Sr. Namitha Louis and Sr. Jasmine Grace along with our novices from Shraddha Sadan, Sacred Heart Novitiate, Medchal.