SR. ANITA ALVA: Was born on 15/12/1950, made her first profession on 12/09/1971 and became a definitive member of the Missionary Sisters of the Immaculate on 04/06/1977. She is one of the pioneers to the Northern Eastern Mission of Siliguri. Besides being the community leader, Sr. Anita has also served as the Delegation leader from 1996 – 2002 and as the Province leader from 2014 – 2020. She shares with us her experiences of learning different languages that came her way for being a missionary. 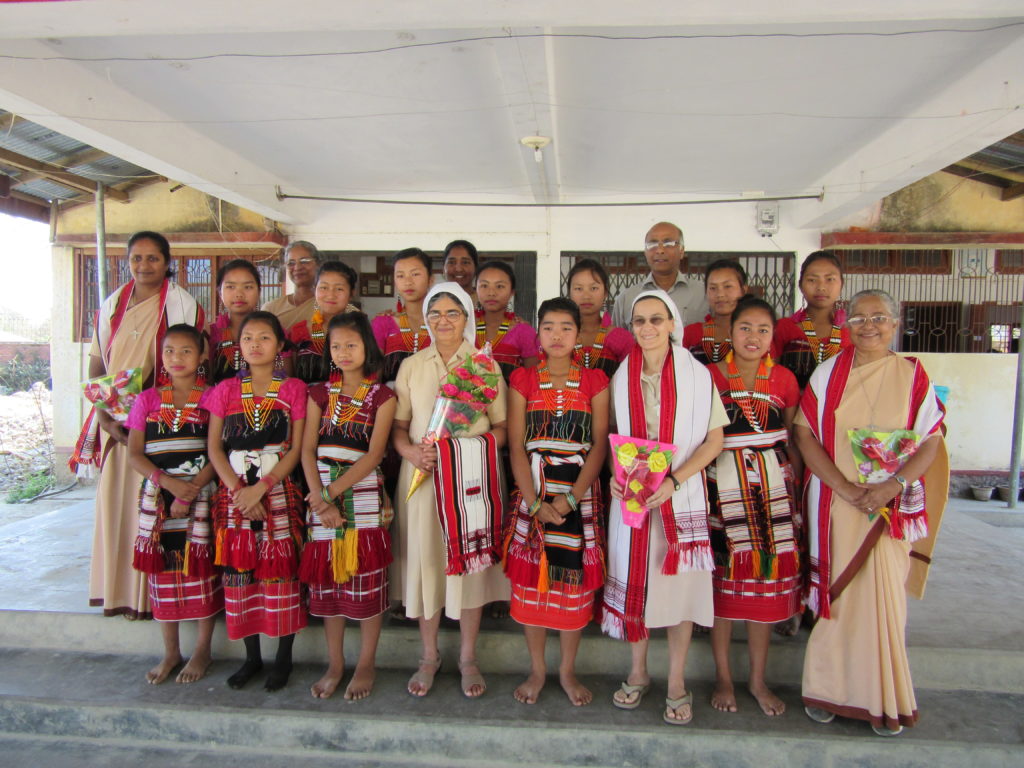 It was the summer of 1966, at the tender age of 16, bidding farewell to my 11 siblings and beloved parents wasn’t easy. Although it was my choice to join the MSI, yet the separation from the blood related family was expensive. As I reached Andhra Pradesh, (Southern Coastal Region of India), everything seemed new. Be it climate, food, customs, traditions, and most of all the Language -TELUGU. KANNADA, TULU, KONKANI are the three languages that I was well versed since my childhood.

Alighting up in the convent, I was to learn both English and Telugu. English somehow was effortless for me, but TELUGU required both hard work and good will. None of us, in the formation house, were allowed to speak our mother tongue and so we would make attempt to speak in broken sentences which yet times caused misunderstanding and at other times became historic moments in the pages of ‘Joke books of MSI.’  This was the maiden experience of learning a new language.

I was just getting acquainted with everything and lo! God had His own designs. I was to go to Italy for my further formation. My arrival to Italy was a cultural shock. Alongside bountiful discoveries and innovative learning, Italian language attracted me. My sociability facilitated my learning process. There were times I experienced the disability in expressing, but it did not discourage me. All the more I took interest in learning the accent correctly and then in pronouncing it rightly. My companions hailed from Italy, Bangladesh, Hong Kong, Brazil and India, which facilitated to live the aspects of INTERNATIONALITY and INTERCULTURALITY.

I returned to India and in Course of time a new destination arrived on my way! I was assigned as one of the pioneers to the Northern mission at Kalchini.  No doubt, one more language was on its way to be learnt. HINDI – Although I had learnt it during my school days, rarely did I use it in my conversation. Hindi alone was not enough, I was to learn the local language called SADRI as well.

The battle was not over here, I was called to leave for Manipur – a state bordering Myanmar. It is like uprooting from time to time and planting in a new soil, amidst totally new environment. Once again everything is new…  The variation in the intonation, the pitch, the way certain sounds are dragged or stressed in MANIPURI language took almost a year for me to understand and more over to distinguish the words and their tones. Even now I am not able to understand it except for few words. I did make some efforts to learn it.

Konkani, Tulu, Kannada, Telugu, Hindi, Sadri, Manipuri, English and Italian are the languages that I am conversant with to read, to write and to speak- “Everything for JESUS! Everything for PARADISE!” These words of Mother Dones, had been a great stimulus for me, while I was learning different cultures, traditions and languages.

Language is how we connect with people.

Through language we adopt to the customs of the place.

It is only when I make the language the part of my identity,

I incarnate the culture of the place.

Every language is difficult to learn but not impossible. Each one finds their own easy methods of learning the language. At initial stages I would listen keenly, pick up few words, formulate short sentences, get them corrected and use them in my conversations. While visiting the families, I would make efforts to prepare short intercessory prayers. Singing was one of the talents through which I would dialogue with people.

Firstly! I learnt that the best way to learn a language is to speak in that language,

without worrying about the mistakes.

As a teacher in the school, there are times, I used to memorise the phrases and enter the classroom to teach. I began to read the books of nursery students – a way to master the new language. I also read aloud many story books, so as to overcome my lack of confidence over the language. I would keep aside my English Bible and read aloud the Bible in local languages, wherever I moved.

Secondly, I realised that to learn a language

I need to become like a child and start from the beginning.

While we were in Manipur, we used to visit the hill top villages along with a teacher- who would help us to translate our prayer service. Later people told us that the teacher was translating wrongly and this was so agonising for us. It was there that I was determined never ever to compromise with the language in a mission.

Thirdly, I understood that learning a language requires

We cannot compare any more the olden ways of learning the language where we did not have formal classes. Our mission today calls us to be expertise of the language. The world of technology diffuses innumerable ways and easy techniques of learning languages even before a missionary could arrive to her mission destination. Thanks to our MSI family, who gives lot of importance to language learning.