At the service of immigrants 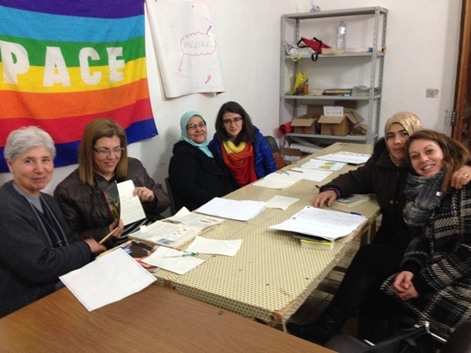 Sr. Giovanna Minardi, MSI, tells how the inter-congregational missionary community is born, which is at the service of migrants in Sicily.

How did the idea of opening this community come about?

The inter-congregational and mixed missionary community of which I am a member, has its origin in February 2013 when CIMI, (Conference of Missionary Institutes in Italy), organized a forum in Trevi to reflect together on” how to educate oneself for the mission”.

The forum ended with a document of 10 points/words, of which two points emerged as new:

•        To foster an inter-congregational work, mixed with the participation of lay people and the religious, that allows the processes of common learning (learning to reflect, to project and to plan together) in a style of communion.

•        To value as much as possible the relationship with the IMMIGRANT FOREIGNERS in Italy, above all through personal contact, taking to the different places inhabited by them: street, prison, CIE (Centers for Identification and Expulsion), peripheries, areas of youth socialization, etc.

On 3rd October of the same year the tragic shipwreck that caused the death of over 300 immigrants (almost all of them from Eritrea, a few miles from Lampedusa, on the island of the Conigli), made the urgency of a serious commitment to many brothers who were driven by the need for survival reached to our coasts, placing their lives at risk. In this way the CIMI decided to start an inter-congregational and mixed community in Sicily that would dedicate itself to this area considered to be a missionary work.

The first steps towards the realization of this project began at the end of November 2015. There were only two of us: Fr Gianni Treglia, missionary of the Consolas and the undersigned, Sr. Giovanna, MSI.

How did you take the first steps?

With Fr. Gianni we started our adventure with a journey of knowing the reality of immigration in Sicily and to present the CIMI project.

We made the first meeting with the persons in charge of the diocesan Caritas of Ragusa who let us know their commitments and activities in favour of migrants. They made us to visit the “Caritas Presidium” at that time the only one in Sicily. We were accompanied to see the agricultural greenhouses of the province where the immigrants work and the exploitation they suffer in this work, violence against women, the homes of immigrants inhuman situations in the greenhouses where they work.

The director of the migrant office of the diocese of Ragusa expressed the need for a spiritual accompaniment of the immigrants, while the director of the Diocesan Missionary Center suggested us to focus on the formation of the clergy to open their minds, broaden the horizons and to help to build an open church; a formation that promotes the correct knowledge of migration, of the culture and of the problems of the countries of origin of the immigrants and which supports in a process of acceptance and integration. This corresponded perfectly to the CIMI project.

The director of the CMD suggested that we address the neighbouring diocese of Noto: Pozzallo, where the disembarkation takes place and Modica could be a residential place for the inter-congregational community in the future.

We were then in Agrigento where we met a Comboni missionary who works for the immigrants. He shared with us some diocesan journey with the migrants and so we understood that there was already a certain organization in this area.

In Messina we met the permanent deacon Santino Torinesi who, work for the Migrants for years also at regional level, described us not only the diocesan reality of immigrants, but also broadened the discussion at the regional level giving us a broad overview of the situation. He invited us not to look exclusively at the emergence of incoming migrants, but also to take into account the migrants who have been living in Italy for years and who are in need of an encounter, of integration and of evangelization.

He advised us to dialogue with Mr. Maurilio Assenza, professor of history and philosophy, director of the diocesan Caritas of Noto, living in Modica. Maurilio listened to us and in turn showed us the activities that they carry out in dioceses in favour of immigrants. He also emphasised the importance of a cultural formation, both to civil society, to the church (clergy, parishes …) He shared with us a long-cherished desire to create a center of peace and globality for Sicily. This dialogue gave an impulse to everyone, Maurilio on one side and Fr. Gianni and myself on the other side.

On 17th December 2015, after the opening ceremony of the Holy Door in Modica, we were introduced to the vicar of the Bishop, Fr. Angelo Giurdanella and to the person in charge of Migrants, Fr. Paolo Catinello. Both were enthusiastic about a possible missionary presence in their diocese. Fr. Angelo made the commitment to an appointment with the bishop, Msgr. Antonio Staglianò. On the day of the memory of Saint Francesca Saverio Cabrini, patron saint of immigrants, we met the bishop who was very welcoming and he thanked us so much for our possible presence in his diocese.

With Fr. Gianni we have lead all these meetings as a plan of God that was gradually manifesting itself through the people that He made us meet.

On 17th March 2016 we began the community life together with Sr. Rachele Soria, Missionary of the Consolata from Argentine and Fr. Vittorio Bonfanti, missionary of the Fathers of Africa. In March of this year (2018) Sr. Rachel had to withdraw from the project for health reasons and on 6th September a Saverian missionary joined our community sr. Adriana Marsili.

How did you organize your community life and the various activities with migrants?

We have developed a community project that includes daily and monthly moments of prayer, the weekly Lectio Divina, planning the meetings of the activities. In turn we animate the liturgy in community, we prepare the Lectio and the monthly retreat, we take turn to cook in the kitchen, for housework, the shopping etc.

For the activities we carry out with immigrants, we implement in collaboration with the diocesan Caritas, each of us is responsible for a field:

• The school for immigrants with the help of volunteers. We welcome all the immigrants of all the countries who already reside from many years at Modica but who had never the possibility to learn the Italian language. The school for us here not only has the scope of teaching the language but we direct above all the human relation. From here also born the common interreligious dialogue (lent/ Ramdam; Church/ Mosque…) From last year we started also tuition for the school children after the school.

•The defense at Pachino the second in Sicily. It is a project of the National Caritas and undertaken by the Diocesan Caritas. We, are helped by volunteers offer our presence through a counter of hospitality for the immigrant workers exploited in the agricultural greenhouses searching for opportunities to attend meetings and orienting them to resolve their problems.

• Center of aggregation for unaccompanied minors, started in Pozzallo, where the boys meet together with young local football tournaments.

• Visit to the prison of Noto for a service of listening to prisoners through art therapy.

• Visit to the various refuge centers in the province of Noto and Ragusa offering immigrants a service of mediation. Thanks to some African languages that the two missionaries know. We conduct meetings in schools and parishes on the theme of globalization.

• Training courses for the acceptance and integration to which we gave the provocative title “ HELP THEM IN THEIR HOME”, the first of which is what we did on 6-7 November on the exploitation of African materials.

To all this are added the contingencies: ch 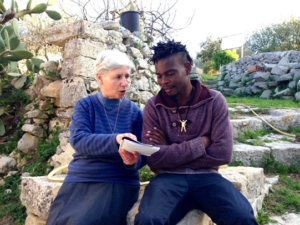 ildren who run away from the centers and who need temporary acceptance, urgent cases of immigrants to visit the hospital for linguistic mediation, vulnerable cases for which to find families willing to welcome them for longer period .

I want to thank the Lord for the gift of this particular mission so interesting and demanding. Let us join in prayer so that every brother /sister in search of a better life, can find acceptance and love.